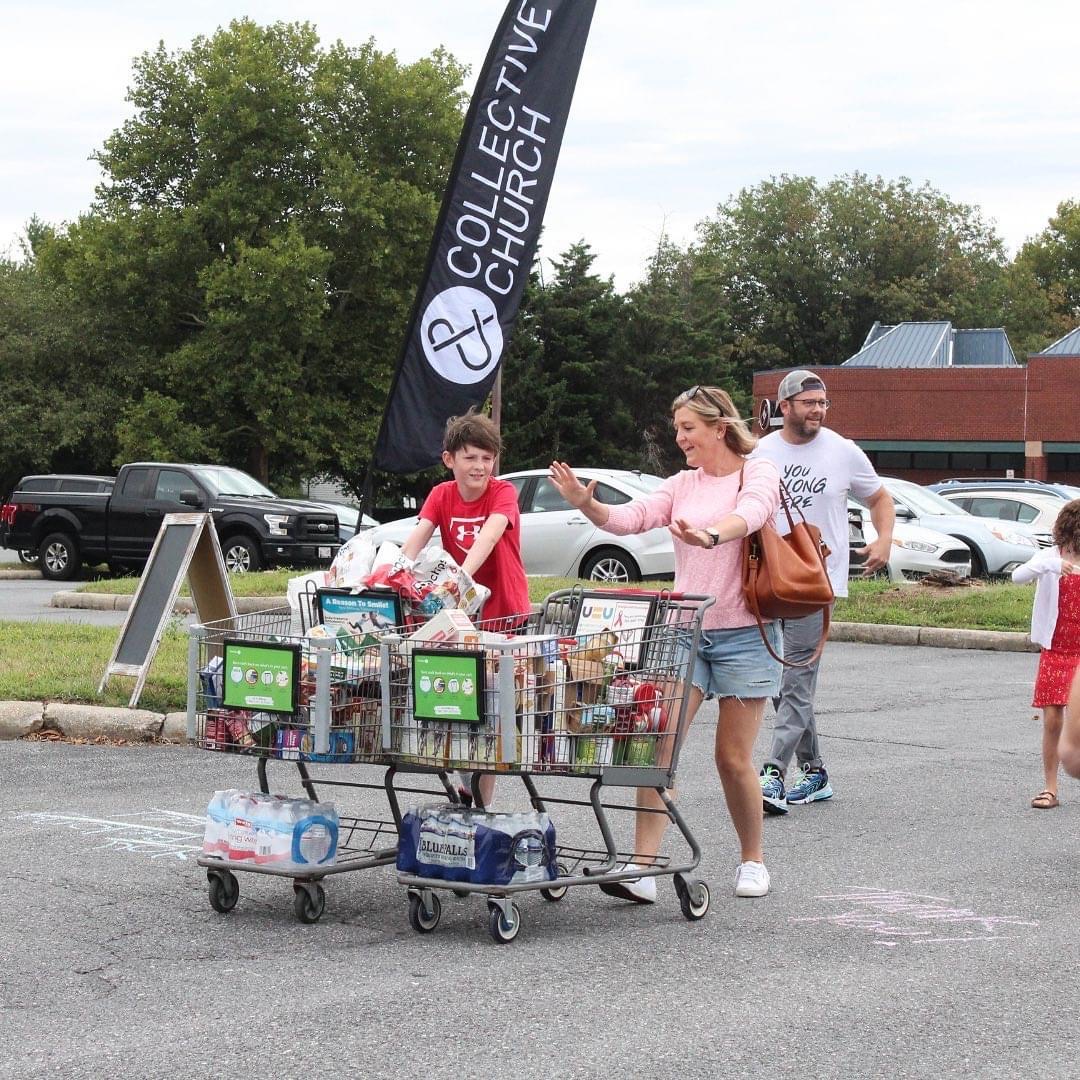 Members of Collective Church gathered in the parking lot of Weis Markets on Prospect Boulevard Sunday morning, determined to reach their goal of 20,000 pounds of food to donate.

They cheered as others approached Collective Church’s tent with carts of groceries to be weighed and loaded onto trucks.

This was the third year the non-denominational church hosted their Grocery Store Buyout, an event where, instead of going to church on a Sunday morning, members put what they learn in church into action and try to accumulate as much food as they and the Frederick community can to donate to those who are food insecure.

“This is church, like, we’re just doing it rather than sitting and learning about it,” Pastor Michael Bartlett said.

Aaron St-Phard, a member of Collective, has a personal tie with the mission of the buyout. He and his family moved to Frederick in 2013, he said. They were homeless for a while and the Frederick Food Bank saved their lives many times over, he said.

On Sunday, he was on the other side of the fight against food insecurity and bought roughly $360 worth of groceries for those who need it. He pushed his over-flowing shopping cart with purpose and pride.

The donated food gets divided up between three partners of the buyout: Blessings in a Backpack, the Frederick Rescue Mission, and the city’s Department of Housing and Human Services.

Being able to give back and help those going through what he went through made him want to cry, St-Phard said.

“People say [hunger] is like a third world country problem, but this is a first world country and people are hungry all around,” he said.

Outside of Weis Markets, church members handed out grocery lists to people walking in to do their regular grocery shopping. The event is convenient, since people don’t have to go out of their way to do something good for their community, according to Valerie Moore, food outreach manager of the Frederick Rescue mission.

The three partner organizations created the grocery list based on what they need the most. At the table where shoppers dropped off their donations, there were color-coded signs with different foods like nuts, canned foods, or baby food.

Weis Markets even ordered extra pallets of the food the church needed to prevent shelves from clearing out like years prior, Moore said.

But everything is needed right now, Blessings in a Backpack managing director Angela Abrishami said.

“When you look at the inventory, I mean, it’s all needed. Food supply chain is a mess. Food costs are high,” Abrishami said.

Caroline Cole went grocery shopping with her kids, Sullivan, who is 4-and-a-half years old, and Eliza, who’s 2. Cole’s friend is a member of Collective Church, so she decided to support her friend and use the buyout as a teaching moment for Sullivan and Eliza.

“It was a good way to kind of tell them that not everyone has enough food like us, so it’s our duty to kind of help others in need,” Cole said.

The children got to pick out foods they thought others would like, and even got to pick their favorite snacks to take home with them, she said.

Danielle Sexton, community engagement director for the church, said they went with a goal of 20,000 since they had such a resounding success the year before.

She thought that this year’s goal was very possible.

“I think the first hours are a little bit slower, you know, people sleep in so who knows? We got a lot of a day left,” she said.

In an email on Sunday afternoon, Sexton said they were fast approaching their goal in the last hour of the event. She said the full total would be announced next Sunday at the church’s services.

The church chooses the date in August with intent, so their partners can be ready to supply food to children once they start school, Bartlett said. And with every year the church hosts the event, they get bigger and bigger, he said.

They started inviting local businesses, and brought out activities and games for people to play. Their only goal is to bring the community together and get enough people to help those that are food insecure, he said.

“We don’t care who shows up, we just want to collect food so people who are food insecure don’t have to worry about where their food is gonna come from specifically, you know, kids,” he said.